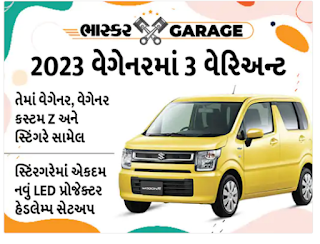 Wegener's new model, the 2023 Suzuki Wegener Facelift has been launched in Japan. The design of the new model has been updated. The look of the new Wagoner looks sporty, along with many high-tech features. The model launched in Japan is completely different from the Wagner in India. Wegener's current model is ruling the hearts of people in India. It has been topping the best-selling list for the past few months. Wagner has sold 22,588 units in July 2022.

Price of a new Wegener

The new 2023 Suzuki Wagoner has been launched in three different models. These models are Wegener, Wegener Custom Z and Stingray. The Stingray features an all-new LED projector headlamp setup. The taillamps are also placed lower than the standard version, giving it an MPV-like design. The standard Wagner still has standard halogen headlamps.

Maruti Suzuki Wagoner looks like all the previous versions with a boxy design look. However, the new 2023 Wagner grille as well as the tailgate have received additional design changes. The Stingray has been given an aggressive look, while the Custom Z Wagoner and Wagoner have a very simple look. All three have almost identical rear and side profiles.

The interior is similar to the current version. The Wagoner gets a beige colored interior, while the Custom Z and Stingray get all-black interiors. The two variants get piano black and faux wood finishes to flaunt the look and feel of the cabin. The infotainment screen has been launched in Maruti Suzuki's new cars, like the Baleno and Brezza you get a 9-inch unit. Talking about some safety and services, the Stingray has features like HUD, ADAS, 360 degree parking.

The Japan-spec Wagoner is powered by a 660 cc motor, offered in both NA petrol and mild-hybrid configurations. The turbo version of this engine comes with the Stingray and Custom Z. Transmission options include a 5-speed MT and CVT. Both 2WD and 4WD variants are on offer. The mild-hybrid powertrain with CVT gearbox delivers a mileage of 25.2 KMPL.

It will be launched in India by next year

The Maruti Suzuki Wagoner 2023 is likely to be launched in India by the end of next year. The model that will be launched in India will be slightly modified and the feature list may also see a change. The global variant is also offered with All Wheel Drive (AWD), which may not be available in the Indian version of the car.

This car is a low maintenance car. Its parts are easily available anywhere. In such a situation, people don't have to rush to the service center for minor problems. Its parts are also easily available in all small and big cities. It has more space than any car in its segment. Its ground clearance is 165mm. So it can run easily even in bumpy roads. It is in great demand in small towns.

In terms of mileage, the company claims that this car gives a mileage of 23 to 25 km per liter in petrol, while the Wagoner with CNG can run up to 33 km on 1 kg of CNG.

The starting price of Wagner is Rs 5.47 lakh, if your budget is between Rs 5 to 7 lakh then you can easily buy this car.

Another good thing is that the resale value of this car is good. This car can be easily driven for at least 10 years, so it is also called the 'best selling affordable family car'.