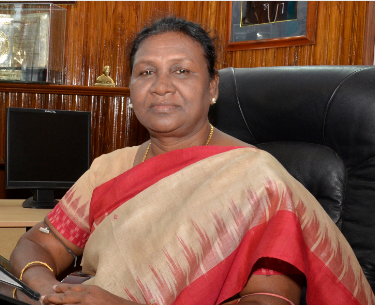 Draupadi Murmu becomes 15th President of the Republic of the India, first person from a tribal community to adopt the highest constitutional post

She is even the first President born in independent India.

At 10:15 a.m., the Chief Justice of the India N V Ramana administered the oath of office to the President, after which she swapped seats with outgoing President Ram Nath Kovind. Murmu signed the vow register presented to her by the President’s secretary. Following the new President’s consent, the home secretary launched the proclamation of appointment of the new president.

At 10:03 a.m., outgoing President Kovind and President-elect Murmu entered at Parliament House. There, they were welcomed by CJI Ramana, the Speaker of the Lok Sabha Om Birla, and outgoing Vice-President and Chairman of the Rajya Sabha M Venkaiah Naidu. Prime Minister Narendra Modi, the Council of the Ministers, governors of individual states, chief ministers, chiefs of diplomatic missions, Members of Parliament, and senior civil and military officials from the government even attended the event.

Draupadi Murmu, the 1st tribal person to become the president of India

Draupadi Murmu has a political career spanning over twenty years. Hailing from Odisha, she was born in a Santal Tribal family on the June 20, 1958, in village Uparbeda of district Mayurbhanj.

She achieved a Bachelor of Arts degree from Ramadevi Women’s College in Bhubaneswar and then worked as a Junior Assistant in Irrigation and Power Department from 1979 to 1983 in the Odisha government. IN 1994, she connected as a teacher at Sri Aurobindo Integral Education Center, Rairangpur and continued serving at the institute till 1997. She got married to Shyam Charan Murmu and had 3 children. Her husband and 2 sons have passed away. Her daughter Itishri Murmu is married and lived in Bhubaneshwar, where she works at UCO Bank.

She was elected as a Councillor in the year 1997 and became the vice-chairperson of the Rairangpur NAC. She became MLA from the similar constituency. From the year 2002 to 2009, Murmu was a national executive member of the BJP’ s ST Morcha. She served as state president for the similar between 2006 to 2009. From the year 2013 to April 2015, she served as a national executive member of a ST Morcha.

From the year 2015 to 2021, she served as Honorable Governor of the  Jharkhand. She was the 1st woman Governor for the state and the 1st female tribal leader to serve as a Governor in any Indian state.