Good news for gaming lovers / Mobile Android games can be played on laptops and desktops from next year, information provided by Google

Good news for gaming lovers / Mobile Android games can be played on laptops and desktops from next year, information provided by Google 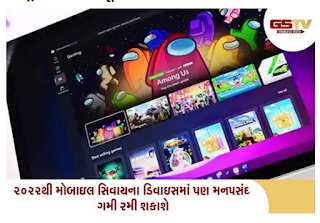 Good news for gaming lovers. Laptop and PC users will soon be able to enjoy Android games on their Windows PC as well. Google is fully prepared for that. According to a report, Google is planning to bring Android game on Windows PC next year. According to a report, the Google Play Games application, which is designed to run on Windows laptops, desktops and tablets, will be available from 2022. Game players will be able to play their favorite Google game on many devices from 2022. Now the fun of Android games will be available not only on phones but also on tablets, Chromebooks and Windows PCs.

Greg Hartrell, Google's product director for Android and Google Games, said in a statement that it was developed by Google. "We're constantly striving to get game players into their favorite Android games," Hartrell said. We plan to bring it to many other platforms.

It will also help to play the game on the desktop

Google spokesman Alex Garcia-Kumart told The Verge that Google designed it entirely on its own. It does not have Microsoft, BlueStack or any other partner. Upcoming apps will help players play Pum games on desktop PCs, apart from phones, tablets and Chromebooks.

Google will prepare the app for The Game Awards

Google is currently preparing an app for The Game Awards, which will be released next year, the report said. While it is not yet clear what technology Google is using to bring the Android app to Windows, Games will run as a lock instead of streaming from the cloud. This will be the native Windows app provided by Google, which will only support Windows 10 and above updated Windows. Hartrell said it would not include game streaming.

The company will distribute the app itself. Google has announced this after testing Microsoft's Android app on Windows 11 PC.