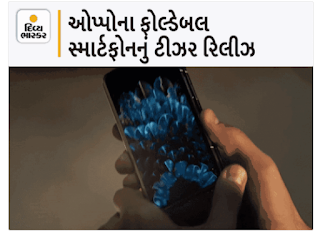 The phone has a 50MP rear and 32MP front camera

The teaser of Oppa's most awaited foldable smartphone 'FindN' has been released. The 15-second teaser features the front and rear panels of a foldable phone. From the teaser it can be said that the upcoming phone looks like Galaxy Z Fold 3.

This phone has a metal finish all around. The phone will have 2 OLED screen displays. The company can use inhouse software in this phone. The phone will launch in India on December 15.

The gravity effect is being seen in the teaser. This smartphone unfolds like a book. After unfolding, the screen size of the phone doubles. The bezels of the phone are very thin. This means there is a common space between the screen and the body of the phone.

According to a leaked report, the phone will have an 8-inch LTPO OLED display. Its refresh rate can be 120Hz. That means the display refreshes 120 times in 1 second.

The phone also has a cover display with a refresh rate of 60Hz. The phone comes with 12GB of RAM and 512GB of internal storage.

The phone can be equipped with Android 12 based ColorOS 12 OS.

The phone comes with a 4500mAh battery with 65 watt fast charging.

For selfies and video calling, the phone may have an in-display 32MP front camera.