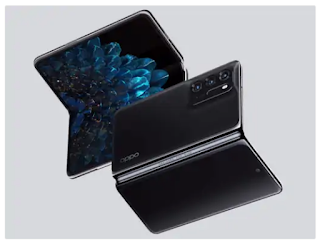 Purple, Black and White 3 color variants of the phone will be launched

Oppo will launch its first foldable smartphone FindN on December 15. The company has also released a teaser of this phone. However, its renders (graphics) were leaked just before launch. The render includes details including phone design, camera position, display area.

Tech researcher Eva has leaked these renders. Accordingly, Purple, Black and White 3 color variants of this phone will be launched. Unfolded phone will open like a book. The front of the phone has a single punch hole display screen.

The back side of the phone has a triple rear camera setup.

Speaker grille is found at the bottom of both the parts of the phone for robust sound quality. Type C port is available for charging. From the render it can be said that the phone has a look like Galaxy Fold. It is unknown at this time what he will do after leaving the post. The actual look and specification of the phone will be revealed on December 15.

The company released a teaser

The company has released a 15 second teaser. The gravity effect is being seen in the teaser. This smartphone unfolds like a book. After unfolding, the screen size of the phone doubles. The bezels of the phone are very thin. This means there is a common space between the screen and the body of the phone.

According to a leaked report, the phone will have an 8-inch LTPO OLED display. Its refresh rate can be 120Hz. That means the display will refresh 120 times in 1 second.

The phone also has a cover display with a refresh rate of 60Hz. The phone comes with 12GB of RAM and 512GB of internal storage.

The phone can be equipped with Android 12 based ColorOS 12 OS.

The phone comes with a 4500mAh battery with 65 watt fast charging.

For selfies and video calling, the phone may have an in-display 32MP front camera.