It will be a three-row 7-seater SUV, equipped with 6 airbags; Hyundai will clash with Alcazar and XUV700

It will be a three-row 7-seater SUV, equipped with 6 airbags; Hyundai will clash with Alcazar and XUV700 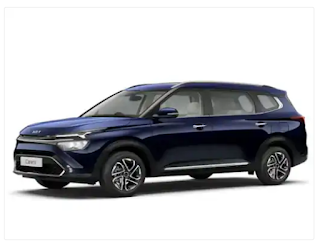 Kia India has unveiled the first glimpse of Kia Carrens SUV in the Indian market. It is the company's fourth model after the Celtos, Carnival and Sonnet. The company claims that this SUV will create a new segment of recreational vehicle in the market. The company has loaded the car with many features, including the first 3-row 7-seater car in the Indian market. It is designed on themes like 'Bold for Nature', 'Joy for Reason', 'Power to Progress', 'Technology for Life' and 'Tension for Serenity'.

Kia Cairns will come with two-tone interior color. The company will now launch it in three color options: Imperial Blue, Moss Brown and Sparkling and Silver. But in the future the company has to introduce it along with many other color options.

Why the name 'Kia Karens'?

The company has also stated the reason behind naming this SUV Kia Carrens. According to the company, it is made up of two words like 'car' and 'renaissance' and the company is confident that this car equipped with features will start a new chapter in the Indian market.

The Kia Cairns car has 6 airbags for safety which makes it the safest car in the country. It will also have a 10.25 inch infotainment screen, next generation connected features, 64 color ambient lighting, 8 bass speakers, ventilated front seat, multi drive mode, skylight sunroof.

Kia India has just made its world premiere of Kia Cairns, but it is expected to have its official launch early next year and the official price will be released then. However, in the market it will compete with cars like Mahindra XUV700 and Maruti Ertinga. As well as its estimated cost can be between 15 to 20 lakh rupees.

This will collide with the car