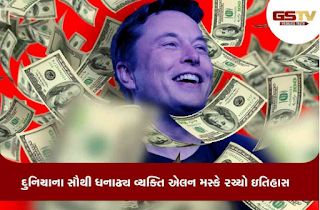 Once again Alan Musk is in the discussion. Indeed, Tesla Inc. CEO Alan Musk's fortune has skyrocketed. The company's CEO Alan Musk's net worth has increased by .2 36.2 billion. The wealth of the world's richest man rose to 28 288.6 billion on Monday, according to the Bloomberg Billionaires Index.

Hertz Global Holdings Inc. Shares of Tesla Inc. rose 36 36.2 billion after the company ordered 100,000 cars. With this, the market cap of electric car maker Tesla has crossed લાખ 1 trillion or one trillion dollars.

According to Refinitiv, Musk now owns 23% of the company, or about 9 289 billion. In addition, Musk is a major shareholder and CEO of rocket maker SpaceX. Musk has a net worth of 28 288.6 billion, which is now more than the market value of Exxon Mobil Corporation or Nike Inc.

Find out why Tesla's stock soared

This is the biggest one-day gain in the history of the Bloomberg Billionaires Index. Hertz has ordered 100,000 Tesla cars to be added to its fleet. Also, Morgan Stanley has raised the target price of Tesla shares to 1, 1,200. Tesla's market cap has crossed લાખ 1 trillion, or ટ્ર 1 trillion, due to the rapid rise in stocks. However, it is less than half of Apple, the world's most valuable company. Apple has a market cap of 2.5 2.5 trillion.