SEBI urges investors to link PEN to Aadhaar by September 30, otherwise money could be trapped

SEBI urges investors to link PEN to Aadhaar by September 30, otherwise money could be trapped 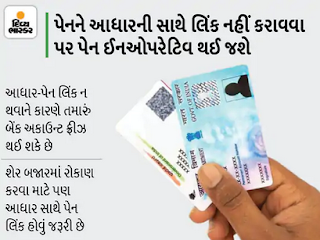 Failure to link will result in the pen number becoming inoperative

An official notification was issued by the Central Board of Direct Taxes (CBDT) on February 13, stating that the pen would become inoperative if the pen and the base were not linked by September 30. If there is no pen, no transaction can take place. SEBI has asked all companies to ensure that the pen card of the investor is linked to the Aadhaar number before September 30, 2021.

The pen will become inoperative

According to the Income Tax Department, if a pen card holder does not link the pen to Aadhaar, their pen will be declared inoperative. The pen can no longer be used in financial transactions.

A base-pen can be linked to a message

The income tax department will then put you in the process of linking the two numbers.

First go to the official website of the Income Tax Department https://www.incometax.gov.in/iec/foportal.

It will have the option of link support at the bottom. Clicking on it will open a new page.

In it you have to enter the PAN number, Aadhaar number and the name registered in the Aadhaar card and click on the link Aadhaar.

The income tax department will then put you in the process of linking the two numbers.

Why is it necessary to link the pen to the base?

If a person does not link his pen to the base he will have to pay extra TDS.

If the pen is not linked to the base, the pen will be declared inoperative.

Lack of Aadhaar-Pen link may cause your bank account to freeze.

Even if you invest in the stock market, it is important to link the base to the pen.