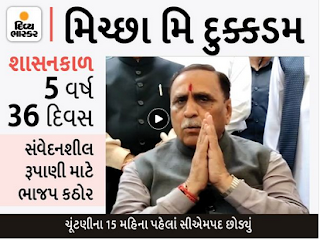 On the second day of the anniversary, Gujarat Chief Minister Vijay Rupani has shocked everyone by resigning. Following this, there is also speculation that assembly elections will be held early in Gujarat. Today, BJP regional and national level leaders arrived with Rupani and started a series of meetings at Kamalam. After the inauguration of Sardar Bhavan at Vaishno Devi Circle in Ahmedabad, Rupani has reached Raj Bhavan directly. Rupani has announced her resignation by briefing the media from there. Meanwhile, Union Minister Purusottam Rupala said the picture would be clear in 24 hours. The new chief minister of the state may meet on Sunday.

Movement in Gujarat BJP is fast

BJP National Organization General Secretary B. L. After Santosh came to Gujarat, the movement of BJP in the state was seen to have intensified. Bandhbaran at Kamalam with national leaders Gujarat BJP-President C. R. Patil's meeting is underway, while four other general secretaries are also present at the meeting. Gujarat BJP organization general secretary Ratnakar is also present in the meeting.

Suddenly the Union Home and Co-operation Minister came to Ahmedabad