The new technology will now charge smartwatches and mobiles with sweat

The new technology will now charge smartwatches and mobiles with sweat

Nowadays smartwatches have become a necessity of the people, as the epidemic has turned people's attention towards health. A watch built on your wrist knows how many steps you walk in a day, how much you exercise, how much your heartbeat is and even your oxygen level. All that is needed is to charge. If one day you forget to charge it you get into tension. In such a situation we let you know that now your smartwatch will be charged with sweat then you may not believe.

However, this is true. Scientists have created a special battery for smartwatches that can be charged by sweat instead of electricity. This is a type of portable battery designed for special wireless devices. This battery can charge a smartwatch for 20 hours with just two milliliters of sweat.

Nanyang Technological University in Singapore has built a portable battery with a plain bandage of 0.8 square inches. The battery is attached to a stretchable and sweat-absorbing fabric. It can be worn with a smartwatch attached to the wrist.

Also the ability to store sweat

It can also be installed in other wearable gadgets like smartwatches. It has the ability to absorb sweat as well as store sweat. This has the advantage that the battery continues to work even when sweating is reduced. For example, if a person is less likely to sweat while walking, or when sleeping or resting, the battery is already storing enough sweat to keep your smartwatch running.

The search for a new device for charging wireless gadgets continues

According to Nanyang Technology's scientist and head of research, this new technique could be useful for worn gadgets. He also said that they are looking for something new for charging wireless gadgets, which are weather-friendly and different from electrically charged batteries. 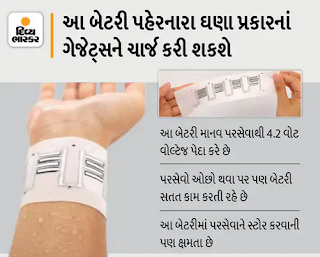 Earlier such a device has also come for mobile charging

Earlier, a team from the University of California, San Diego, developed a device that would allow mobile phones to be charged without electricity. According to him, sweating after wearing the device while sleeping will generate electricity, which can charge mobile phones and smartwatches. 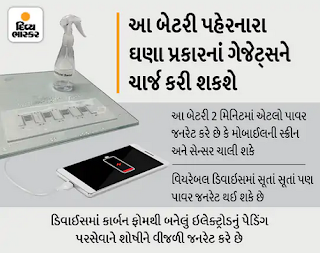 The device can be attached to the fingers, the research team said. The moisture of the finger will generate electricity while sleeping. It will be able to charge the smartphone after wearing continuously for three weeks. Its capacity is likely to be increased soon.

This is how mobile and smartwatch charging batteries will work

The device can be tied like a band to the fingers towards the plaster for the mobile and around the wrist for the smartwatch. A padding of carbon foam electrode absorbs perspiration and converts it into electricity. The electrodes are equipped with enzymes that trigger chemical reactions between lactate and oxygen molecules in sweat to generate electricity. As the wearer sweats or presses on the strap, electricity is generated.