The cheapest plans of Jio, Airtel and Vi, get rid of the hassle of recharge for one year

The cheapest plans of Jio, Airtel and Vi, get rid of the hassle of recharge for one year 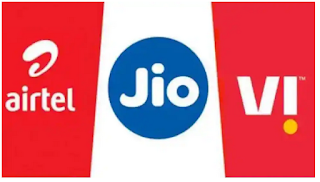 Each telecom company is offering its customers plans with one year validity. In this plan, customers get a big benefit for less money.

New Delhi: Reliance Jio, Airtel and Vodafone-Idea Vi have introduced a one-year recharge plan to attract their customers and eliminate the problem of recharging frequently. This plan is cheaper than the monthly recharge plan and has more benefits. These plans from Geo, Airtel and Vodafone-Idea cost less than Rs 125. So let's find out which plan is best with one year validity and what are the benefits.

Airtel's Rs 1498 plan has one year validity and free calling

First let's talk about Airtel's Rs 1498 plan with one year i.e. 365 days validity. Recharging this plan will cost you Rs 124.8 per month. Airtel's plan comes with 24 GB of data. Airtel's recharge plan offers the benefit of free calling on any network across the country. The plan gets 3600 SMS and comes with 365 days validity. Users get a subscription to Wink Music with Airtel Extreme App Premium, Free HelloTunes, Unlimited Downloads.

Reliance Jio's Rs 1299 plan is the best. Geo's plan has a validity of 336 days (11 months). The monthly cost of this plan is Rs 118. It gets 24 GB of data, after the data limit is met, its speed remains up to 64 Kbps. This recharge plan also offers free calling on any network. The plan gets 3,600 SMS. In addition, Geo users get a free subscription to Geo apps like JioTV, JioCinema, JioSaavn.

So Vodafone Idea also has a cheap plan that lasts for one year. The plan is for Rs 1499. This plan has a validity of 365 days. That means a month's cost comes to Rs 124.91. Vodafone-Idea's (Vi) Rs 1499 plan offers unlimited calling, 3600 SMS and 24 GB data on any network. Like Airtel, Vodafone-Idea is offering the benefit of unlimited calling.