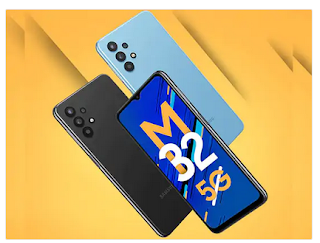 The phone comes with a side mounted fingerprint sensor for security

2 RAM variants of this phone have been launched. The 6GB + 128G variant is priced at Rs 20,999 and the 8GB + 128GB variant is priced at Rs 22,999. Slate black and sky blue color variants of the phone have been launched. The phone will be available for purchase from Amazon India from September 2 at 12 noon. The phone can also be purchased from the company's official website Samsung.com. ICICI Bank customers will get an instant discount of Rs 2,000.

This phone supports dual SIM. The phone runs on Android 11 based Samsung's OneUI 3.1 OS. The phone has a 6.5 inch HD + TFT Infinity V display. Its refresh rate is 60Hz. The phone comes with an Octacore MediaTek Dimension 720 processor with up to 8GB of RAM and 128GB of storage. The phone's storage can be expanded up to 1TB with the help of SD card.

It has features like 5G, WiFi, Bluetooth, GPS for connectivity.

It has a side mounted fingerprint sensor for security.

The phone comes with a 5,000mAh battery that supports 15 watts of fast charging. The dimensions of the phone are 164.2x76.1x9.1mm. The phone supports Dolby Atoms.