Registration for PM Shram Yogi Mandhan Yojana continued to decline, with only 15,283 people joining from April to July.

Registration for PM Shram Yogi Mandhan Yojana continued to decline, with only 15,283 people joining from April to July. 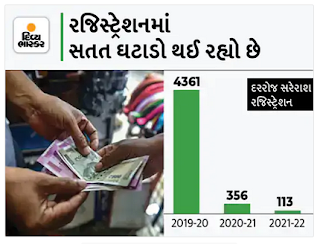 People's interest in the Prime Minister's Labor Yogi Mandhan (PMSYM), launched by the central government for unorganized sector workers, is now waning. During the first 4 months of the financial year 2021-22 i.e. April to July, only 15,283 people have joined the scheme i.e. only 3,821 workers per month. In the first 24 days of August, there were only 1,223 new registrations, according to figures released by the Ministry of Labor and Employment.

The target was to involve 100 million people in 5 years

From the time the scheme was launched on 15 February 2019 to 24 August, only 45.1 people joined it. The government had set a target of 100 million people in 5 years, but so far not even 5% has been achieved.

Why are people getting disillusioned?

According to experts, workers have to invest 10 years in this scheme. Then the workers get a pension of Rs 3,000 per month when they turn 60 years old. Suppose a worker registers at the age of 40, then he will start getting pension after 20 years i.e. in 2041. 3 thousand rupees is a very low amount in 2041 considering the rising inflation.

What is the plan?

Under this scheme, unorganized sector workers get a pension of Rs. 3000 after the age of 60 years. The government contributes as much as the beneficiaries make every month under the scheme. That is, if the workers' contribution is Rs 100, the government will also add Rs 100.

Who can invest in this scheme?

The income of unorganized sector laborers for the scheme should not exceed Rs. 15,000 per month.

Age should not be less than 18 years and not more than 40 years. Already have not availed of any other pension scheme of the Central Government.

Your contribution depends on your age.