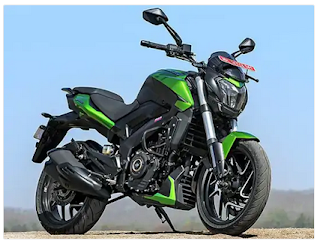 The Bajaj Dominar bike with its aggressive look and powerful engine has been the first choice among the youngsters. For sports bike lovers, Bajaj Auto is preparing to launch a touring version of its popular bike Bajaj Dominar 400. Customers will be able to book this updated bike from next month. However, the company has not yet announced the official launch date of this bike. The bike will use dual tone handguards, a longer windscreen and an updated mirror. So if you are thinking of getting a sports bike then wait a bit and buy this new bike.

The bike will have alloy wheels and LED lighting

The bike will have alloy wheels and LED lighting

The bike will be powered by a 373.3cc, single cylinder, DOHC engine. The engine is expected to come with a 6-speed gearbox. The Dominar 400's engine is going to generate 39.4hp of power and 35Nm of peak torque. Apart from this, the bike will also have alloy wheels and LED lighting. Apart from this, this bike is likely to get a muscular fuel tank with an extension. The bike is expected to come with a digital instrument console and a full LED setup. This bike can weigh up to 187 kg.

Customers will get both front and rear disc brakes in this bike. The bike will get dual channel ABS. Apart from this, this bike will be equipped with many advanced features, which will give the rider a better riding experience.

The official price of this bike has not been announced yet and the company will announce it at the time of bike launch. It is believed that it could be launched in the market with an ex-showroom price of Rs 2.11 lakh.