Like the eighth wonder of the world, this solar tree played Gujarat's mane all over the world

Like the eighth wonder of the world, this solar tree played Gujarat's mane all over the world 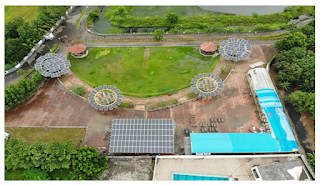 The Vapi municipality built the tree at a cost of Rs 80 lakh, generating 90 kg of electricity

Amesh Patel / Valsad: For the last few decades, green energy has been the only solution to the problem of fuel consumption for the next generation due to the use of haphazard fossil fuels by humans. Then solar energy will be the best option for India. At that time, the state has started generating electricity through solar tree in the last industrial town of Vapi. The solar tree is a new word for us when the tree is considered a blessing for human life. Formed in Vapi, this solar tree has become the world's largest generating solar tree. So here is a special report on this tree that generates electricity from the sun.

From time immemorial, the tree has been considered a friend of man. In today's modern age when the whole world is suffering from global warming, trees and forests have become essential for human survival. So today we are not talking about trees with green leaves. But there is talk of a solar tree generating electricity from solar energy. This structure, which looks like the giant tree in the picture, is in fact a solar tree. Atal Bihari Bajpayee Udyan in Vapi Municipality has 4 modern solar trees. Which also inspires the next generation to generate electricity from solar energy to use fossil energy to a minimum. In collaboration with Gujarat Urban Development, Vapi Municipality has constructed this tree generating 90 kg volts of electricity at a cost of Rs. This means that the solar tree is now generating 90 kV of the 180 kV of water that supplies water to the Chaal area.

Due to the increasing transportation in the country over the last 3 decades, the use of foreign exchange is spent on crude oil. Then now the Prime Minister of the country Narendra Modi is also promoting power generation through wind, solar, hydro energy. In this, India's summer is harsh. Solar energy is considered to be one of the best solutions. Many solar parks have been under construction in the country for the last one decade. So solar trees have also started to be built in this type of government construction, while this solar tree constructed in Vapi has broken the world record of 11.5 KV solar trees in Bengal.